Indeed it turned out to be an enjoyable weekend alright, but not for the reasons we expected.  While we maintained our bullish bias in the update last Friday, we underestimated how strong the market would remain following the breakout above 2000 $.  Now price is well above 2100 $ as exuberance persists, although after doing some analysis regarding past bubbles it looks like there is the potential for a substantial continuation to the upside.  On the low end, if we compare this run to the one in March/April of 2013 then 3000 - 5000 $ is the target, however if we take the entire bull market from 2 $ to 1200 $ in 2012/2013 then it is more like 10,000 - 15,000 $.  While we certainly think the latter is a far stretch given how much larger and more liquid the markets are now than they were back then, the former target range does not seem so unrealistic at this point seeing as though 3K $ is less than 50% higher from current levels.

Having said that, we think there will be a more significant shakeout in the not too distant future prior to reaching the eventual top, one which we hope to take advantage of (although we are not holding our breath).  For the time being we see little standing in the way of even higher prices over the near term, although we [members-only text].  Hodler's can keep hodling, while non-hodler's learn a valuable lesson about investing vs. trading.

We return to the 6-hour chart to start the week as it remains our favorite view of the short term setup.  We can see that price has continued to push higher following a [members-only text] bar over the weekend, however we are now back to [members-only text] and have new (and very substantial) dynamic support building right around the [members-only text] level.  Also note that this is where a new demand area sits, as do the still rising EMA's, and market structure and the Ichimoku Cloud both remain bullish.  Throw in still supportive longer term SMA's below the market, as well as a lack of resistance other than the new [members-only text] area above the market, and it looks like the path of least resistance remains higher.

Moving on to momentum and volume, it should come as no surprise that all of the momentum oscillators other than RSI are pinned in officially overbought territory, and RSI is getting awfully close.  Also note that MACD seems to be painting a bearish divergence for the time being, although the A/D line and volume profile continue to support higher prices over the near term. Despite the fact that overbought momentum in conjunction with positive volume indications has been a recipe for higher prices over much of this year, given the minor confluence between current levels and the [members-only text] area we think the market might take a breather soon (although we are not expecting a dump back below [members-only text] at this point). Back to the daily chart for the a medium term view of the market, and we can see that here too price is entering another [members-only text] area after the previous one was breached over the weekend, however this one is much larger and extends all the way up to near the [members-only text] level.  Also note that SCMR is still painting [members-only text] candles while new dynamic support builds around [members-only text] on this timeframe as well, all while the moving averages and Ichimoku Cloud continue to rise in support of the market.  From a price action and market structure perspective, all systems are still a go.

As far as momentum and volume are concerned, things remain overbought on all of the momentum oscillators much like the 6-hour chart above, while we have yet another MACD bear div to contend with as well.  That said, a continuation of the current rally will likely lead to a breakout in MACD, and overbought momentum has [members-only text], so we see no reason to hop off right now due to momentum.  As far as volume goes, the A/D line continues to pick up steam to the upside and trading volumes are still being dominate by the bulls (likely due to the still intact supply/demand imbalance), however volume profile remains thin which is why we cannot rule out a spike lower before taking a crack above the [members-only text] level.  Overall it certainly appears as though the bias remains with the bulls, and in our opinion we are not quite i[members-only text], so for now we think [members-only text] are likely over the course of this week.  ​ 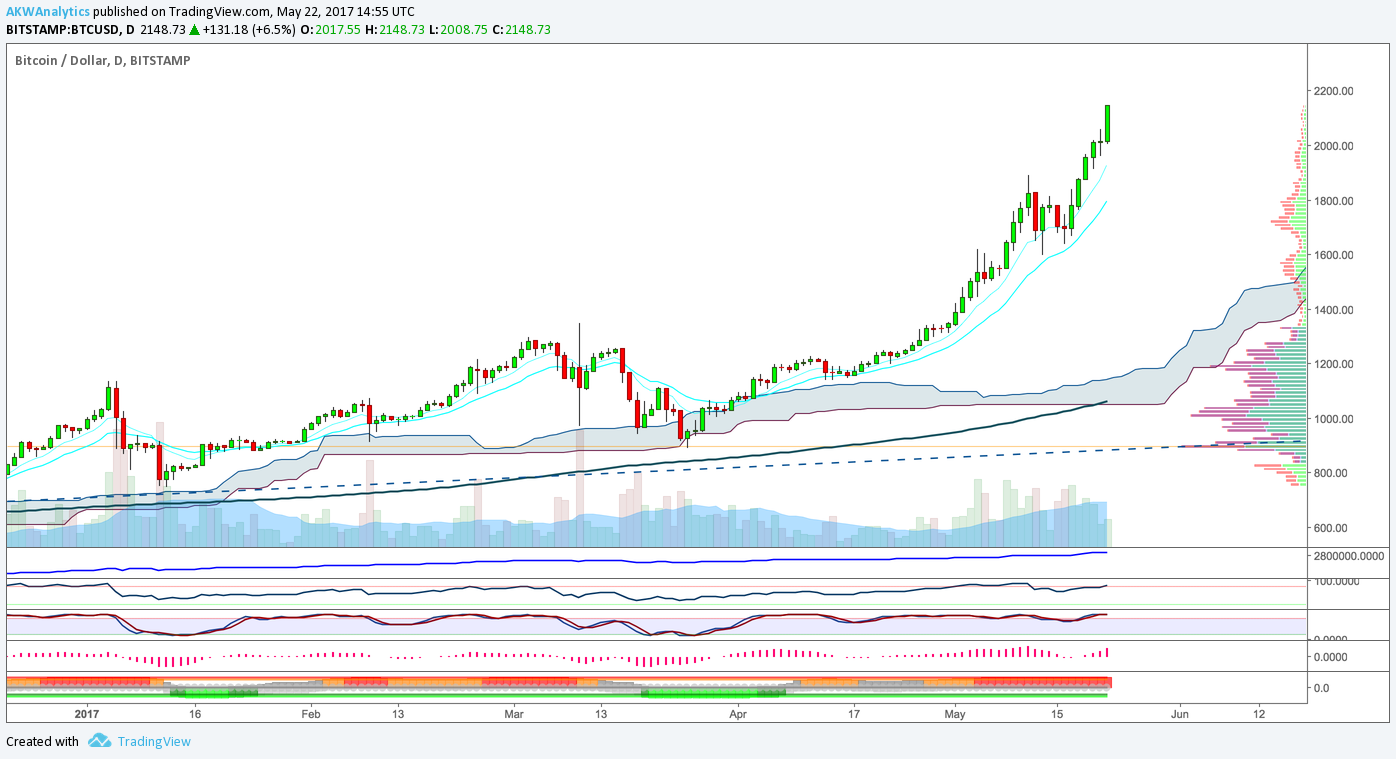 Not only is our bullish bias technical in nature, but the fact that the Consensus Conference 2017 is being held in NYC this week reinforces the euphoria as big ideas, hopes, and dreams are tossed around by some of the most well-known bitcoiners in the world.  This will also likely help many of the major alts do quite well as new conference-goers feel compelled to speculate on what they are seeing.

While we think this is likely to be a [members-only text] for price over the next few days, it could create a post-event hangover for the markets going into next weekend so we need to stay aware of that.  Until then, though, it looks like we need to keep our moon suits on.
SUBSCRIBE FOR COMPLETE FORECAST
Posted ProTrade Ideas: