Following a stall out consolidation that began last time price hit new all time highs a few weeks ago, the market finally broke out to the upside above 1892 $ and has continued to run throughout the course of this morning (although we are pausing now).  This move validates the VST ProTrade breakout play we have had issued for over a week, which has already been taken and closed for profit at the intended target of [members-only text].  While we cannot rule out a continuation to the upside given that the bias remains firmly in the bull camp, we wanted to end the week on a high note so that we could go into the weekend without too much stress.  That said, we are still looking for opportunities both above and below the market price now, so perhaps we can catch another wave higher in the not too distant future if given the chance.

Today we zoom in a bit more via the 4-hour chart for a peak at the shorter term technicals and what they are saying about the upcoming weekend.  We can see that SCMR [members-only text] as price continues to push to the upside, and market structure is still [members-only text]. Also note that the EMA's are still stacking to the upside, the SMA's remain supportive of the bull market (as well as the current rally), the Ichimoku Cloud continues to move higher, and we now have new dynamic support building around the [members-only text] level.  Seeing as though momentum is getting stretched, which we will discuss below, a retracement back to that area over the weekend is certainly not out of the question (and would actually be healthy).

Moving on to momentum and volume, we can see that Willy and the Stochastic are both officially overbought, RSI is not but is close, MACD is still lagging, and PPO is now flashing weak sell signals. On the other hand, trading volumes continues to support [members-only text], the A/D line is still trending slowly higher, and volume profile looks surprisingly good other than a large notch around [members-only text].  Given this VP notch area has already been tested a few times this week and held, we would be surprised if price could get that low over the next few days barring some bad news. 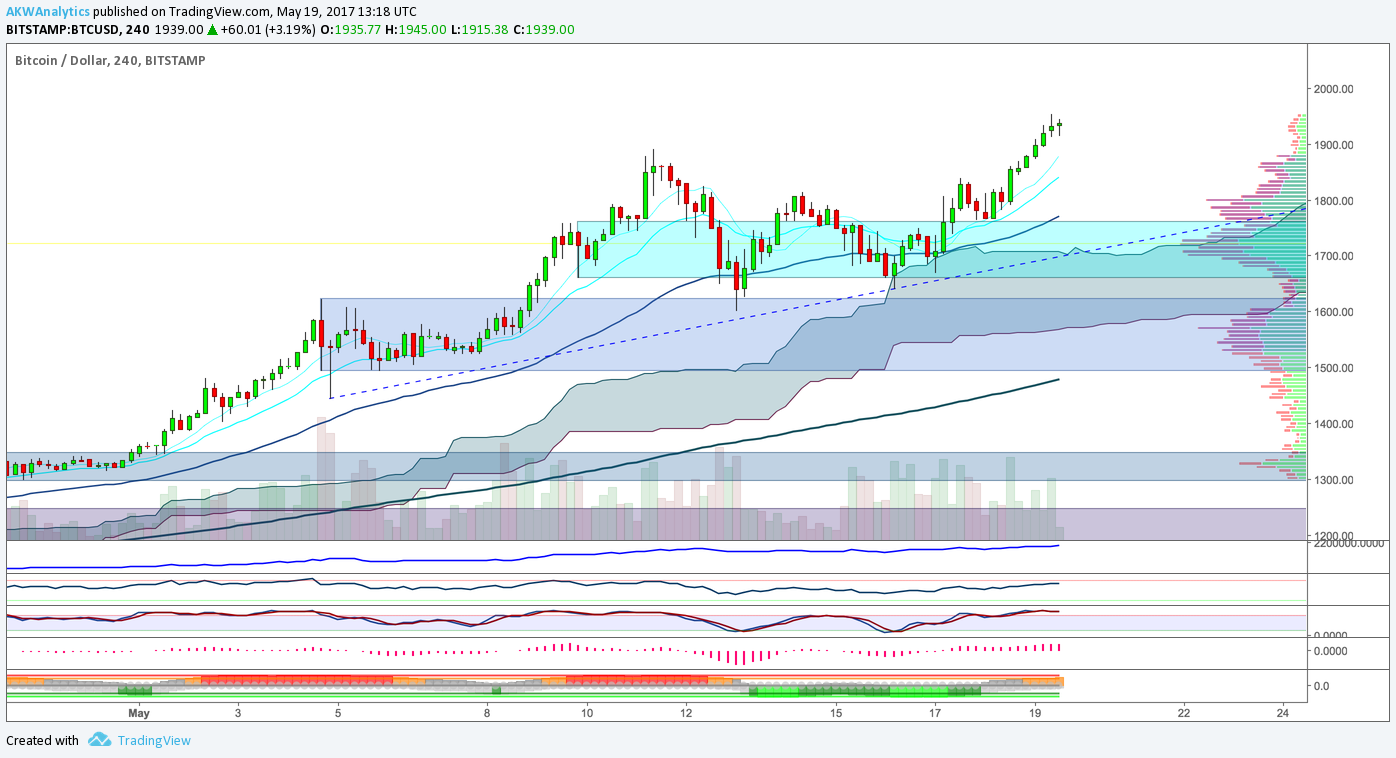 To finish off the week with the proper perspective and context for the current state of the market we take a look at the weekly chart for the first time in awhile.  We can see clearly that price is now in the Fibonacci extension area off of the 2013 ATH's which should provide some fairly significant resistance between current levels and [members-only text].  That said, it is not affecting the market yet considering SCMR is still painting [members-only text] bars, candle formations remain [members-only text], and all relevant moving averages continue to support higher prices.  The main thing that gives us pause from a price action perspective is the fact that there still isn't any new dynamic support until below [members-only text], however there isn't any new dynamic resistance either which means the run higher is likely not over yet.

As far as momentum and volume are concerned, things remains relatively mixed although not all that much different than they have been for much of 2017.  Notice that Willy, RSI, and the Stochastic are all in officially overbought territory now, while MACD extends higher and PPO flashes weak sell signals.  On the other hand, trading volumes continue to lean bullish, the A/D line remains in a healthy uptrend, and volume profile is very thin but has been for a few years. Overall, we don't see any pressing reasons to alter [members-only text], although it is important to keep in mind that we are now in a weekly resistance zone that could end up being a regional topping area at some point.  That said, all systems are still a go for now, and there is room up to the 200% Fib level around [members-only text], so we are not ready to call a top yet. It looks like it will be a nice Spring weekend for most of North America, and we are hoping for the same in the markets.  While the overnight rally may seem fairly large in absolute terms, in actuality these moves are getting smaller in terms of percentages (which is what investors really follow) meaning they often need to pull back less than the relatively bigger percentage moves we have been used to in the past.  If the market can tread water around current levels, or even retrace a bit to test below the [members-only text] level again, then we will consider another [members-only text]setup.  If not, and price simply continues higher without any pullback at all, then we will stay stay patient and wait for a better risk/reward opportunity to re-engage the market.

Two times per week we release our free crypto trading reports. We include our unique insight, proprietary technical analysis, price charts, sometimes even a ProTrade Idea, as well as frequent discounts to BBA's premium subscriptions. Join below to get these reports delivered directly to your inbox.

We will not spam or sell your information