The bitcoin markets remain choppy this Friday morning with prices ranging from the high-2300's $ up to the 2450 $ level where it is still hitting resistance in multiple forms. That said, the technicals are not flashing any significant warning signs at the time being despite the rally this week, so as long as the [members-only text] dynamic support area holds the bias will stay to the upside over the near term (and if we stay above [members-only text], then medium term bias remains favorable).

​From a fundamental perspective, scaling debates continue in earnest as the eceosystem now seems to be feeling the pressure of BIP-148 given we are already into June. As long as discussions remain open and appear to be progressing, even if slowly, then price should keep following the trend higher.  With that said, there are some indications that the market could be stuck in the current consolidation range for another few weeks as the longer term oscillators continue to recharge, so we are not really in a hurry to do much over the weekend.
6-hour Chart:

We finish off the week with a look at the 6-hour chart for a glimpse at the short term setup. We can see that over the past 24 hours price has been struggling to get higher into the ATH supply area, and now we have a [members-only text] SCMR [members-only text] trying to paint on near term bearish market structure so things could [members-only text] here for awhile. On the other hand, the EMA's remain supportive for now, the SMA's are still confirming the general uptrend, and the Ichimoku Cloud continues to move higher. This rather murky picture leads us to believe that we could be in store for a choppy weekend that continues the process of consolidation.

Moving on to momentum and volume, notice that Willy and the Stochastic are officially overbought while RSI and MACD continue to lag. We can also see that both RSI and MACD are starting to roll over while PPO moves quickly to flashing sell signals. Regarding volume, trading volumes are still [members-only text] and volume profile remains porous below the market, however the A/D line continues its ascent which is more convincing than either of the other two indications. Overall, it looks like a [members-only text] than we have seen so far might be in the cards over the weekend, however seeing as though there is a lot of support below the market at multiple levels we continue to be buyers of dips into attractive r/r areas. 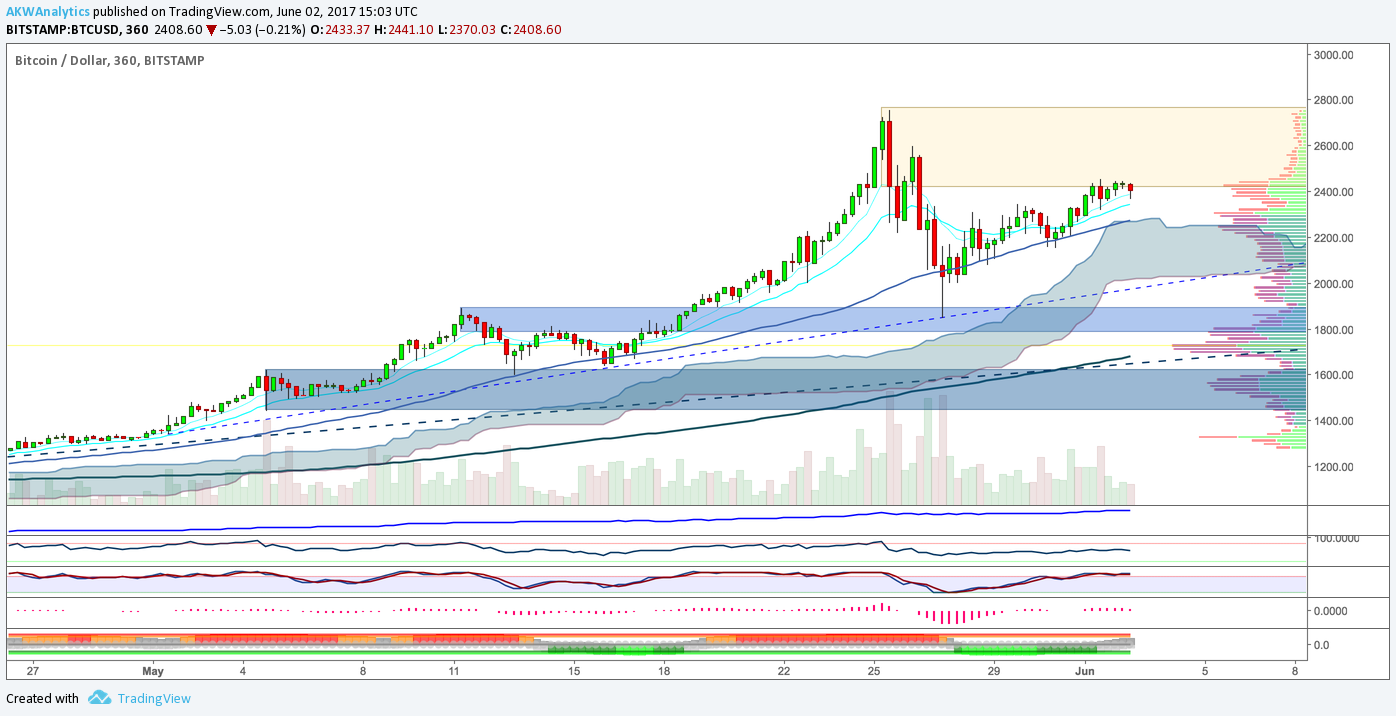 Lastly is the daily chart, once again, although today we have a slightly different take on it. Notice that we have drawn what looks to be a fairly large ascending triangle formation, typically a [members-only text] pattern, which if accurate would portend a resolution higher over the next few weeks. That said, we would prefer more touchpoints so we are not ready to call it definitive, but market structure and price action are currently supportive of the idea. Additionally, we can see that SCMR has [members-only text], all moving averages continue to move to the upside, and the Ichimoku Cloud remains bullish. From a medium term perspective, all systems are go, however shorter term is a bit more dicey (as noted above on the 6-hour chart).

As far as momentum and volume are concerned, none of the oscillators other than PPO are in overbought territory, however they are close and could use another recharge lower. Conversely, both exchange volumes and the A/D line are both favoring [members-only text] so until we get some clearer longer term signals that the top is in, which would have typically happened by now if that was the case, we will maintain a bullish bias on this market despite not being involved for the time being. As we head into the first weekend of June we are not expecting all that much action from a broader perspective, although we could have rangy volatilty that creates a suboptimal trading environment for all but the most nimble scalpers.  Overall we think the market still looks [members-only text] on almost every timeframe, especially considering the gains so far over the course of 2017, however the longer the market can base and consolidate within the current range/triangle the more upside potential there is when we do see a breakout.  Regardless, we will remain patient and watchful from the sidelines, ready for what the market throws at us.
SUBSCRIBE FOR COMPLETE FORECAST
Posted ProTrade Ideas: