​Monero has been bullishly biased over the past few weeks, although we really didn't see an acceleration in buying until this past weekend.  Following a break above the key psychological level of 0.01 early on Saturday morning, the market proceeded to extend it's rally up close to the 120 resistance area (118 to be exact).

Since that local high price has been pulling back to test the key 100 near term support level, which has held so far, and given the importance of this level we would not be surprised to see it tested more than once in the coming days.  Having said that, the market is currently trading in a consolidation range between 99 and 118, so until we move away from this area price should stay relatively flat.

Moving on to the charts, today we want to look at both the 6-hour and the daily charts once again. We start with the daily chart for some context which is showing price pausing in the [members-only text] zone and at a significant historical resistance line.  Those rejected wicks [members-only text] are not a great sign in terms of a continuation to the upside, however SCMR is still painting [members-only text] so another breakout remains a possibility.  Additionally, the near term EMA's have crossed over to bullish, the 200 SMA remains slightly positive, and market structure appears to be slowly transitioning from bear to bull.

Moving on to momentum and volume, things aren't nearly as bullish as they seem above.  The Stochastic is now officially overbought, Willy and RSI are quickly moving up there, and PPO is now neutral.  Not only that, but trading volumes remain unimpressive despite the recent rally, the A/D line is still under pressure, and volume profile is showing a large notch down between [members-only text].

As far as the 6-hour chart goes, we can see that we are getting some turtle soup rejection candles up in the medium term supply area, although SCMR is still painting [members-only text]. Additionally, we now have some bearish divergences emerging on what is close to overbought territory on Willy, RSI, and the Stochastic, while the A/D line remains suppressed and PPO paints significant sell signals.  Finally, the short term EMA's are still [members-only text] and trendline support remains intact around [members-only text], however the 200 SMA continues to trend lower despite the near term respite above it.

Generally speaking we are still bullish on XMR over the long term given very positive fundamentals and encouraging higher timeframe charts.  Having said that, we think price is getting [members-only text].  For the time being we are expecting the market to range between 99 and 120 until resolving either up and out to the [members-only text] resistance area to complete the short term Wyckoff sell model, or we move lower from here to test more substantial support in the [members-only text] region.
XMR ProTrade Ideas:

(b) **[CANCELLED on 11/14/2016]**: We have cancelled our previous VST ProTrade (b).  No new VST ProTrades at this time given poor risk/reward profiles at current levels. 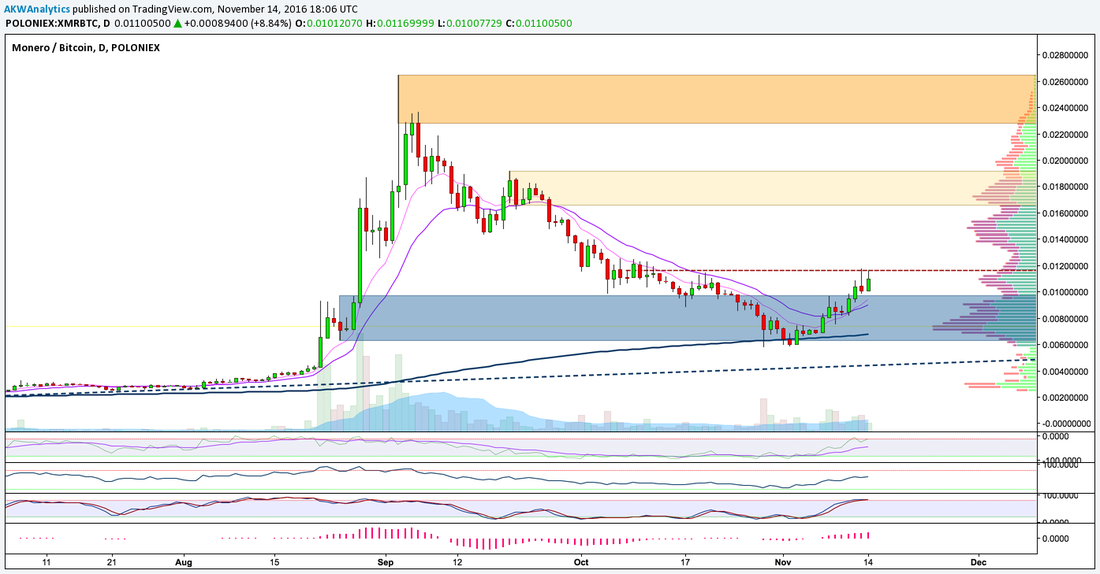